The underground Turda Salt Mine is burried at a depth of 115 meters (380 ft) below the surface and dates back to the 17th century. 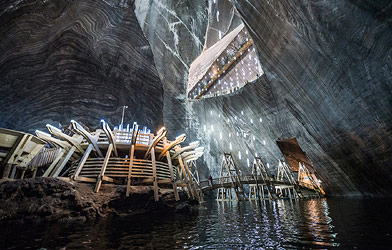 Recently it was transformed into an astonishing underground amusement park, and has attractions ranging from an amphitheatre for events, a bowling alley, a mini golf course, Ping-Pong tables, an underground lake with paddle and row boats, and even a Ferris wheel.

As opposed to the conventional use of explosive, the mine was initially formed using entirely handwork and machinery and served as a base for salt exploitation. Later in time, the mine was also used to store cheese and as a bomb shelter during World War II.

Today, the old mine is at the same time a museum with a variety of mines, rooms and spaces where visitors can see how salt used to be collected and transported, and also an exciting amusement park that has been called one of the coolest underground places in the world.