Biertan Fortified Church stands head and shoulders above the other buildings in Biertan. It was originally a Catholic church, built when the region belonged to Hungary. 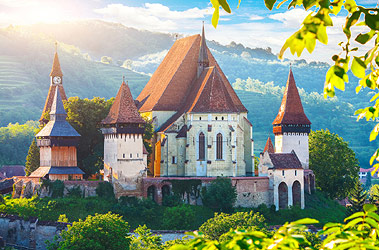 It became a Lutheran church after the Reformation. Rather than building a fortress to defend against Ottoman invaders, the villagers fortified the church. Built in Late Gothic style, it is one of the largest fortified churches in Romania. The church is noted for its towers, including one used to store food during sieges and another to imprison husbands who wanted a divorce.

Biertan flaunts one of the most splendid fortified churches in Transylvania, featuring a brilliant locking mechanism with 15 bolts that can be simultaneously activated. In the Prison Tower, couples that wanted to divorce were held in a small room for two weeks, sharing everything, in an attempt to get back together. In the summer, the village hosts the horror movies festival, Full Moon Festival.